Did you know that the use of Chinese wild yam as a remedy dates back centuries ago? Our historical records state that this plant’s bulb and root were used as an alternative herbal preparation to treat various endocrine disorders and inflammatory conditions of joints, lung, spleen, kidney and more.

Wild yam is an ornamental vine that originates in North America and some parts of Asia. It is attached with multiple other names that include Chinese yam, Shan Yao, American yam, barbasco, or China root.

Owing to its healing properties, wild yam has been an essential part of traditional medicine over the years. The herb is often constituted as a part of the treatment of poor appetite, chronic diarrhea, asthma, dry cough, frequent urination, diabetes, and more.

In addition to its use in menopausal hormonal therapies, such as for hot flashes, vaginal dryness, osteoporosis, Chinese wild yam has proven to be extremely beneficial in relieving the symptoms of premenstrual syndrome (PMS), fatigue, and digestive issues. Various studies have established a therapeutic association of the herb with inflammatory diseases like rheumatoid arthritis.

Traditional Chinese medicine discusses its effectiveness as a spasmolytic remedy to help with:

It is also occasionally used as an antiemetic agent to treat pregnancy-related nausea and vomiting (NVP) or hyperemesis gravidarum. As an irritant to the uterine tissues, its properties can be useful in the induction of labor in the presence of dysfunctional uterine contractions.

What Allows Wild Yam To Be A Potential Therapeutic Option?

The Chinese wild yam contains a naturally occurring substance called allantoin that instigates tissue structures’ growth and regeneration and influences the healing time. Hence, it is curative in certain conditions.

There is another active constituent called diosgenin present in it, which is a natural variant of estrogen. The substance can be extracted and transformed into various steroids like estrogen and dehydroepiandrosterone (DHEA) and administered into the body to enhance estrogen levels and function.

Wild Yam is effective in boosting immunity, reducing infection, and obesity. The potential arises from the anti-oxidative characteristics it possesses. Wild yam enhancing the antioxidant defense system. The elements accountable for this property are zinc, copper, magnesium, selenium, iron, and manganese, and are usually present in trace amounts.

Studies suggest that the aforementioned antioxidant feature of the Chinese wild yam also imparts an anti-diabetic effect. It does this by inducing the greater release of glucagon-like peptide (GLP-1), thereby regulating the circulation normal glucose and insulin levels. This lends support in maintaining the integrity of β-cell function and strengthening the lipid metabolism and profile.

Another vital wild yam benefit is the reduced risk of atherosclerosis. This is because distorted lipid levels and free radical generation can add to the advancement of atherosclerosis (plaque-laden lesion in the arteries) with time. β-sitosterol and ethyl linoleate content in the yam extracts are associated with anti-atherogenic properties.  Although not curatives but the wild yam indeed provides symptomatic relief from advancing or deteriorating health illnesses.

Other Wild Yam Benefits And Uses

A few research pieces have recorded anti-spasmodic efficacy to a certain extent in the yam activity that can help relieve muscle spasms such as in PMS. Besides, it may also have a role in correcting blood coagulation, infertility, fluid metabolism, and functional kidney processes.

The relative contraindications discussed were hormonal disorders such as endometriosis, uterine fibrosis, and cancer of the breast, ovaries, and uterus. It could be due to the adverse interaction amid the hormone replacement drugs and the women’s contraceptives simultaneously. Hence, it is advised for pregnant or lactating women to be extra cautious when consuming yam and never do so without consulting a doctor as sometimes, its benefits tend to weigh lesser than its adverse effects in certain conditions. In addition to water and starch, Chinese wild yam is concentrated with constituents like vitamin B1, vitamin C, mucilage, amylase, amino acids, and glutamine.

Out of the 600 species that have been identified, only about 12 of them are rendered edible. It is one of the most known plants in Chinese culture that promotes health and longevity. It is added in foods as an ingredient in Chinese cuisines, like sautéed yam with soy sauce and stir-fried Chinese yam. However, its use as an edible is limited due to a bitter taste that comes from the soapy compounds it contains known as saponins.

The yam composition is as follows: proteins (4 to 9 percent), amino acids (2 to 7 percent), starches (about 44 percent), sugars (3 percent), vitamins, and amylases, to name a few nutrients, are abundant in the Chinese yam.

In addition to the nutrient supply, yam has exhibited its worth as a satiety agent as well. The fiber-rich content tends to produce a feeling of fullness after eating it. It is often helpful for individuals who are on a weight-loss drive.

Traditional Chinese medicine considers yam a part of ‘tonic herbs for Qi deficiency,’ which are particularly used to supplement cases deficient in any one of the four components, i.e., Qi, Blood, Yin, and Yang. As per the TCM, Qi is the basis of all; it is the essence of every existing living system. Qi deficiency implies an energy deficit in general. Qi tonics are particularly helpful in improving spleen, and lung function and detoxification as these are the organs primarily involved in the production of Qi.

Wild Yam is a traditional herbal ingredient which can be added to your daily routine to increase digestive enzymes and improve overall digestive health in the long run. 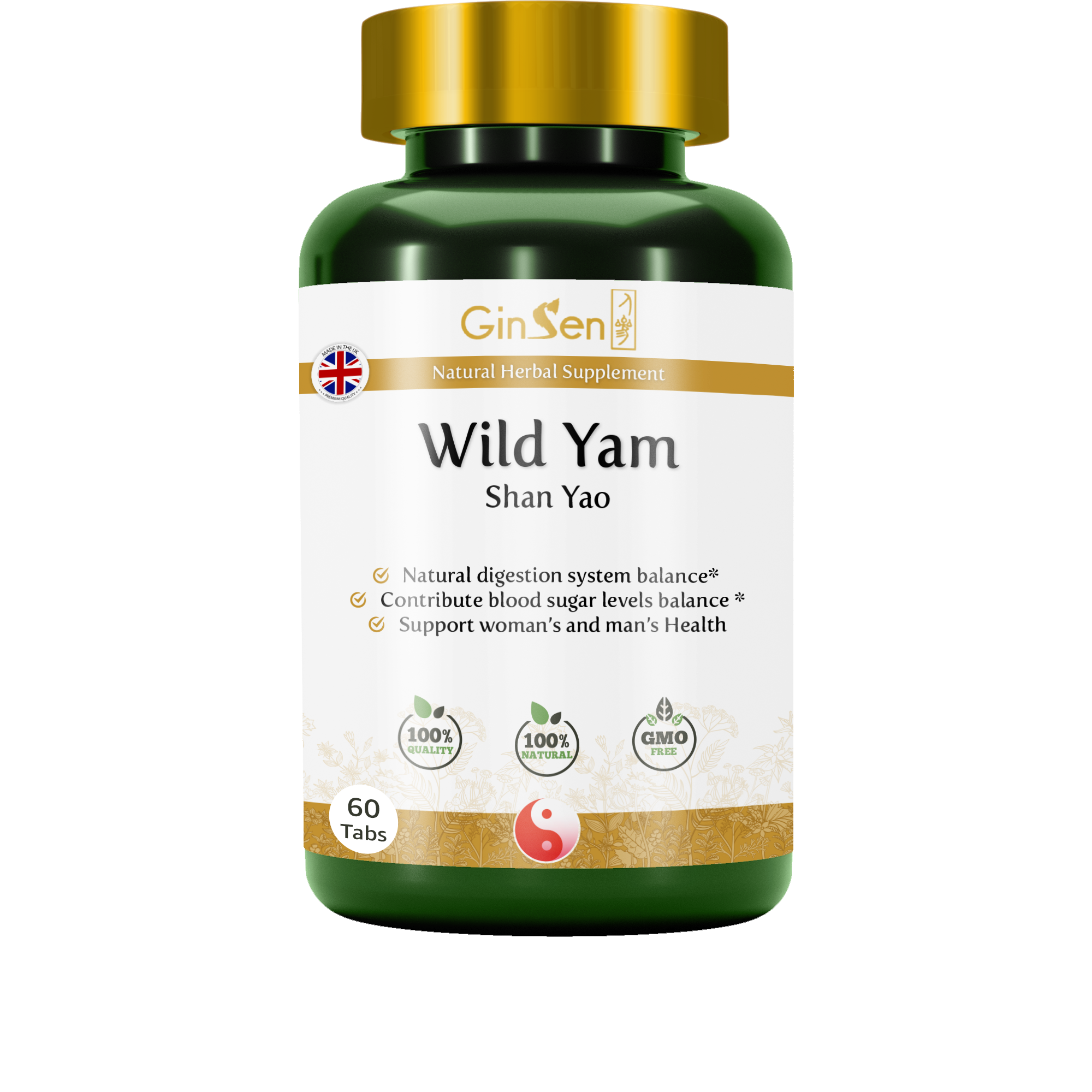 YOU MAY ALSO LIKE: Benefits Of Astragalus ( Huang Qi )