Turmeric is a spice which has been used in traditional Asian medicine for thousands of years. Its Latin name is Curcuma longa, and it is a member of the ginger family.

It comes from the underground root of the plant, also known as the rhizome. It is a bright yellow spice with a warm, earthy flavour and provides a wealth of healing benefits.

The Benefits of Turmeric in Traditional Chinese Medicine

In Chinese, turmeric is known as Jiang Huang which roughly translates as ‘fragrant gold.’ It has been used in traditional Chinese medicine (TCM) for centuries and has a wide variety of uses.

According to TCM theory, turmeric has a pungent and bitter flavour and is slightly cold in nature. It acts on several different channels including the Heart, Lungs, Liver, and Gallbladder.

In TCM, turmeric can be used to invigorate the blood, promote healthy circulation, and prevent stagnation. It is cooling and dispersing and can be used to:

Nowadays, modern medicine is finally catching on to the multiple benefits of turmeric for health. Let’s take a look at some of its uses from a scientific perspective.

The primary active ingredient in turmeric is curcumin which is best-known for its powerful anti-inflammatory effects. This has led to turmeric being used as a treatment for pain including chronic conditions such as arthritis as well as injuries or muscle soreness following exercise.

However, the benefits of turmeric are not limited to pain relief. It also has antioxidant effects which, combined with its anti-inflammatory properties, could help to prevent conditions such as:

This natural ingredient also aids memory. Not only is it useful in the prevention of Alzheimer’s disease, but it also benefits working memory and attention in the short-term.

Another potential benefit is it increases the number of ‘good bacteria’ in your gut and promoting healthy digestion.

How to Maximize the Absorption of Turmeric

One of the only downsides of turmeric is that it is not easily absorbed by your body. When you ingest it by mouth, it has to pass through your digestive system and liver, meaning that many of its active ingredients are lost.

However, the absorption of turmeric’s beneficial compounds can be increased if you take it together with black pepper. Piperine, the active compound in pepper, is thought to improve the bioavailability of curcumin by as much as 2000%!

It is also important to take curcumin at the same time as a small amount of fat, as curcumin is fat soluble. Choose healthy options such as a spoonful of coconut or olive oil, half an avocado, or a small glass of full-fat milk.

How to Incorporate More Turmeric into Your Diet

As well as being a medicinal spice, turmeric is also used as a cooking ingredient. It is probably best-known as an ingredient in curries, but you can also add a spoonful to scrambled eggs, smoothies, or salad dressings to give them a healthy twist. You could also try adding sliced, fresh turmeric to hot water and brewing yourself a healing, herbal tea.

However, the best way to ensure that you get a beneficial dose every single day is to take a supplement such as GinSen’s Turmeric Joint Remedy or Turmeric Tang. These traditional remedies contain turmeric combined with other herbs selected to boost its beneficial effects. The Turmeric Tang supplement even contains black pepper to help you get the most with the minimum effort!

Get personalised advice from our TCM specialists for free!

Where to buy Turmeric Capsules

Turmeric Curcumin Extract can be added to your daily routine for its digestive benefits. This powerful herbal ingredient contains natural anti-inflammatory compounds and can be used to improve Cognitive Functions, boost the immune system and promote joint, muscle, and bone health. 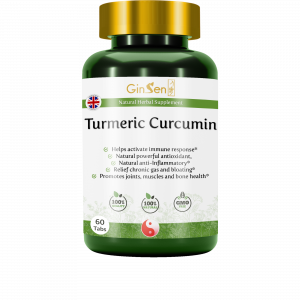