Humans can’t exist alone. Every living being depends on others to live, at the same time, we are all intertwined with the environment. Traditional Chinese Medicine (TCM) endorses this concept unabridged.

The classic book of the yellow emperor the Neijing Suwen reads:

Stating with no doubt that man is linked to and influenced by changes in his environment. Adapting your lifestyle and diet to changes is one of Chinese Medicine´s best advice to sustain good health. Avoiding seasonal health issues and favoring a strong immune response to infections. In this article we will be explore how to say healthy in summer with Chinese Medicine.

The 5 elements theory or Wu Xing is the philosophical foundation of traditional Chinese medicine and culture. Sometimes called “The Law of 5 the changes”, this concept arose by observing nature’s transformations. It is a way of ordering one big universal force in 5 domains. Each one is ruled by one of the fundamental elements.

These elements shape us as human beings and play a part in the natural balance of our bodies. Their excesses or deficiencies will have an impact on our health. Our main goal should be to ensure harmony and balance among these 5 forces within our body.

YOU MAY ALSO LIKE: How To Prepare For The Spring Season With Chinese Medicine

During the summer solstice the Sun’s rays hit the Earth at a steep angle pointing out the beginning of summer. It is the hottest season of the year and, accordingly, fire will be its ruling element.

Fire burns upwards. In correlation, summer is about rising. Temperature rises; water evaporates and goes up, high temperatures cause objects to expand. Summer brings expansion, growth, and transformations. It is a life burst.

This time of the year represents the peak in yang energy. Let’s look at the direct relationships that MTC finds with summer:

THE ORGANS IN FOCUS DURING SUMMER

The Heart and Small Intestine organ system are predominant during Summer. The small intestine separates food’s nutrients, from waste. These nutrients’ energy influences directly the good quality of the blood. The heart’s bioelectric function is to pump it to all levels of the body, an easier task with high-quality blood. Understand the importance of consuming good and strong energy foods.

For TCM, the heart is also where the soul dwells. So the heart is also responsible for spiritual well-being, mental functions, memory, and the awareness of being. When the mind is calm the fire element is in balance. The heart is strong and healthy, thoughts will be clear and sleep is restful.

Indicators of an imbalance in the fire element can be:

THE FIFTH SEASON OR LATE SUMMER

The five elements law dictates the existence of a fifth season known as Late Summer. This concept has existed since the era of the roman empire, they name it “Dog Days”, and defines a period of excessive heat in the last 20 to 18 days before the season ends.

The fifth season is ruled by the Earth element, and the spleen and stomach are the related organs. These two are the most vulnerable during summer and late summer. Their natural energy has a downward direction, earthward. This collides with summer´s ascending momentum, so they tend to fall into disharmony and cause problems if it is not prevented with good eating habits.

Some may lose their appetite while others experience episodes of fullness or diarrhea.

The extraction of nutrients from food is the stomach’s bioenergetic role. After the stomach digests the nutrients, the spleen converts them into energy, which it then transports throughout the body.

When the fire energy gets out of control it can “burn” the stomach and spleen, spoiling their functions. Then the digestive system will give heat related problems such as:

Excess heat in the late summer causes a rise in humidity, in both, the environment and the human body. Known in TCM as dampness. If this dampness in the body is not released, for example, by physical exercise, it may lead to problems such as:

The spleen also has an important role in blood production. If this ability is affected by excessive heat or dampness, it becomes an underlying cause of:

According to Joerg Kastner in his book Chinese Nutrition Therapy, the summer heat “reduces body fluids and damages the yin.”

Taking this into account, the first recommendation is to drink lots of fresh water.

Change your diet to one that is high in water-rich foods and low in solids and dry foods. More fruits, fresh vegetables, salads, and not fried or over cooked meals. As well as more colorful and smaller meal portions.

Foods with fresh and cold properties (yin) will be the most recommended as they can eliminate heat, reduce toxins and generate more body fluids. This will help your body balance out the season’s extreme yang.

Be careful with meat as most meat products heat up.

To prevent summer diseases and stay in balance with the high temperatures, ancient Chinese doctors advised us to:

Other useful tips for the summer season are:

Get personalised advice from our TCM specialists! For free!

Healthy Digestive Remedy by GinSen are 100% natural food supplements designed to provide acid reflux relief naturally. It works to eliminate symptoms such as bloating, gas, irregular bowel movements, colitis and IBS by getting to the root cause of the disrupted digestive health. 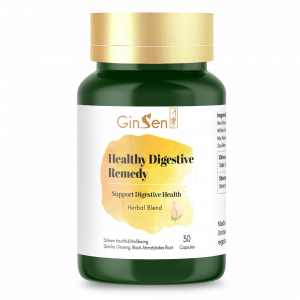