During the winter season, it can be tough to avoid coming down with cold or flu. There are plenty of medications on the market that will help sufferers to manage the cough, sore throat, and phlegm that generally accompany these seasonal illnesses. Though they can sometimes be effective, these popular medications contain many synthetic ingredients and have a tendency to leave users feeling groggy and tired.

In Traditional Chinese Medicine (TCM), herbal remedies are used to treat a variety of illnesses, and cold and flu are no different. Nin jiom pei pa koa is a popular traditional cough syrup that brings users relief without the grogginess and added ingredients that are found in store-bought cough and cold medications. Read on to learn more.

Created over 300 years ago, nin jiom pei pa koa is also referred to pei pa koa or simply loquat syrup. Nin means patented, Jiom means cure, Pei Pa means bitter herbs, while syrup simply means syrup. Its creator combined a variety of medicinal herbs such as bellflower root, licorice root, fresh ginger, honey and loquat along with other traditional herbs to engineer an elixir in order to treat his own mother’s persistent cough. It was so effective that it went in to mass production and is still wildly popular today.

Loquat syrup is effective in treating all the common symptoms that accompany cold and flu. These include dry mouth, cough, sore throat, and phlegm. A study out of the Institute of Chinese Materia Medica at the China Academy of Traditional Chinese Medicine in Beijing demonstrated that this cough syrup, with its combination of honey and loquat, was effective in relieving cough and clearing mucus. It even has anti-inflammatory properties which can aid in the relief of the aches and pains that can sometimes come along with the flu. It also has thirst-quenching properties that provide relief by moistening the throat. Thankfully, it features a pleasant taste instead of a medicinal flavor that most remedies are known for.

This Chinese cough syrup has been very popular for centuries because of its remarkable effectiveness in:

The combination of herbs in this cough syrup works to treat a wide variety of symptoms. Ginger helps the body to fight off germs. Loquat syrup acts as a natural anti-inflammatory and is also very nutrient dense. It contains plenty of vitamins and minerals including Vitamins C and A, potassium, magnesium, and calcium. Honey helps to give this herbal blend its cough suppressing properties and even promotes healing. It also contains licorice root which helps suppress upper respiratory illnesses thanks to its antimicrobial properties.

For adults and children over 12 years of age, take three teaspoons (15ml), 3-4 times a day, or as directed by your healthcare professional. Store in a cool, dry place out of direct sunlight. If you are taking medication, consult your doctor before using this product.

If you are looking for a drug-free option during this cold and flu season, then consider trying this Pei pa koa. This honey and loquat syrup has a long history of effectively combating these seasonal illnesses while also helping users to avoid that groggy feeling that comes along with most cold and flu remedies on the market. 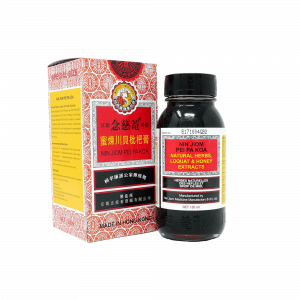