What Is Liver Heat and How Can You Reduce It?

In Traditional Chinese Medicine (TCM), many of the common diagnoses do not always translate to a familiar diagnosis that is more common in modern medicine. Read on to learn more about liver heat, how it is caused, and what you can do to reduce it.

What is Liver Heat?

Traditional Chinese Medicine teaches that the liver is the root cause of all diseases. An aim of TCM is to treat excesses of which there are six. These include wind, cold, dryness, moisture, and heat. In modern medicine, this would most closely refer to any issues that are related to the entire hepatic system. To practitioners of TCM, heat in the liver may present itself as chest pain, dry mouth, and dizziness. Common emotional symptoms include anger, moodiness, and depression. Digestive symptoms associated include belching, feelings of fullness, and a feeling of a lump in the throat. Some of the more severe symptoms are red or bloodshot eyes, headache, rapid pulse, insomnia, and a flushed face.

The liver is responsible both for blood storage and the flow of Qi. It also plays a vital role in digestion. Excess liver Qi can turn into heat in the Liver . It is believed that these symptoms can be brought about thanks to high stress and negative emotions. Certain foods and toxins can also play a role in causing excess heat in the liver.

In TCM, the liver plays an important role in the health of the entire body. It’s often called upon to control functions that are considered feminine in Western medicine, such as menstruation and menopause, and it also works closely with the kidneys to regulate digestion, metabolism, and the reproductive system.

How Can I Reduce my Liver Heat?

There are many herbal options used in TCM that have been shown to reduce excess heat in the liver.

Chai Hu (Bupleurum): Chai Hu is one of the most common herbs used to improve the general functioning of the Liver, regulate Liver Qi and Qi Stagnation. It is often recommended to clear heat from the Liver.

Peppermint ( Bo he ): Peppermint contains pungent, aromatic and cooling properties. It is associated with the Lung and Liver meridians, and is used to expel wind heat.

Other herbs and roots, such as tree peony bark and white peony, work to clear heat, sooth the liver, and add nourishment to the yin. These can be found in tea, extract, or pill form.

Diet to help with excess heat in the liver

Reducing heat involves adding cooling foods to your diet. Foods such as cucumbers, melons, kale, spinach, arugula, fish, and bananas will all help to clear the heat. Sipping on chrysanthemum tea or water with lemon will also aid in reducing heat in the liver.

It is also worth mentioning that there are foods which are best avoided as they have been shown to agitate the liver.

Liver Detoxing Remedy by GinSen are natural supplements designed to cleanse Liver for improved skin health. Expertly formulated and inspired by the principles of Chinese Medicine, Liver Detoxing Remedy is made using the finest natural ingredients and works by getting to the root cause of your skin troubles. Liver being the body’s natural detoxifier, it plays an important role in cleansing the skin. 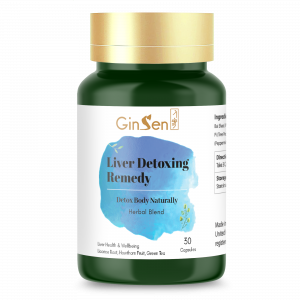 This herb made from dried root of bupleurum scorzoneraefolium is commonly used to treat liver qi stagnation thanks to its soothing properties. It disperses the qi to relieve stagnation. It also aids in the relief of the symptoms of bloating and pain due to its ability to improve digestion. 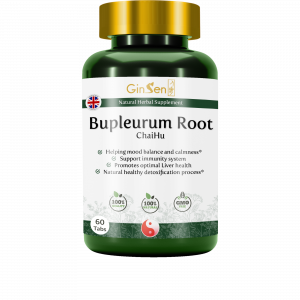 If you believe you may be experiencing excess heat in the liver, speak with your healthcare practitioner to discuss your options. It may be as simple as making a few dietary changes and following a diet of cooling foods while avoid those foods that are known to cause heat. There are also many drug-free herbal options that are both affordable and available for purchase locally or online.