Red Sage has been used traditionally as Chinese medicine for thousands of years because of its mind-blowing beneficial effects and antioxidant properties. Although its benefits have been described long ago, it is still regarded as the best medicine one can get. Due to this, botanical scientists describe it as a beneficial “red light” to prevent the development of many diseases, especially cardiovascular diseases 1 and other associated ailments.

You must, however, keep in mind that the Red Sage plant is quite different from the clary sage. Although both the plants belong to the same genus, they are quite different species. This sage is not the same that you probably use for cooking.

This article aims to highlight the details of Red Sage plant, its potent antioxidant properties, and the beneficial effects on the body systems.

What actually is Red Sage?

In botanical terms, the Red Sage plant is called Salvia miltiorrhiza. Salvia is the Latin name that in literal terms means “health”, “salvation”, or “to save” and is referred to this plat because of its powerful healing properties. It is a perennial plant of the mint family, like other sage plants.

People commonly know it by the name of “Red Sage” as its flowers are bright red. It is also sometimes called Chinese salvia, Redroot sage, Dan Shen, Radix, Tan-Shen, or red-rooted sage. Red sage is commonly and vastly found in the areas of Japan and China.2 It is also essential to know here that mostly the dried roots of this plant are used as medicine.

Red Sage has always been known widely for its health-beneficial properties that help boost optimal health tremendously. Currently, it is going through many clinical trials and research studies as it is under consideration by the Food and Drug Administration (FDA) and may even become the first Chinese medicine to gain approval from FDA.

So far, the following health benefits of Red Sage (Dan Shen) have been found:

An evidence-based research study was published in the journal Evidence-Based Complementary and Alternative Medicine3, according to which Red Sage can help in preventing and sometimes curing many heart-related diseases such as:

However, the study done is not completely conclusive, but the conclusions are promising. If your doctor prescribes supplements of this herb, you may find it very useful in alleviating the chest pain caused by heart issues.

Red Sage also has the beneficial effect of activating blood circulation. Your body is made up of a very large network of capillaries that provide the blood supply to the body’s microscopic cells. All of the capillaries are collectively termed microcirculation.

This herb also possesses several antioxidative properties by which many free radicals and oxidative substances within the blood are detoxified. Thus, increased blood microcirculation is the well-documented benefits of Red Sage. It has also been found that somehow the substances (tanshinones and phenolic acids) present in Dan Shen, maximize the open capillary network and thus improve the blood flow to the organs.4

Several research studies suggest that Red Sage helps protect the body from several diseases related to lifestyle and diet, such as diabetes. Diabetes occurs due to the increased blood glucose levels within the blood and the commonly occurring Type II diabetes is related to obesity.5 It helps reduce blood sugar levels and also helps prevent diabetes-related complications. One study published in the journal Evidence-Based Complementary and Alternative Medicine found that the use of Red Sage-dripping pills significantly improved the visual function of people with diabetic retinopathy (vision problem because of retinal damage caused by diabetes).6

Red Sage has also been found to help in the regeneration of liver cells when taken in pill form, according to the study published in the journal Liver International.7 Scientists expect that one day this can be used as a drug for helping people with severe liver damage. 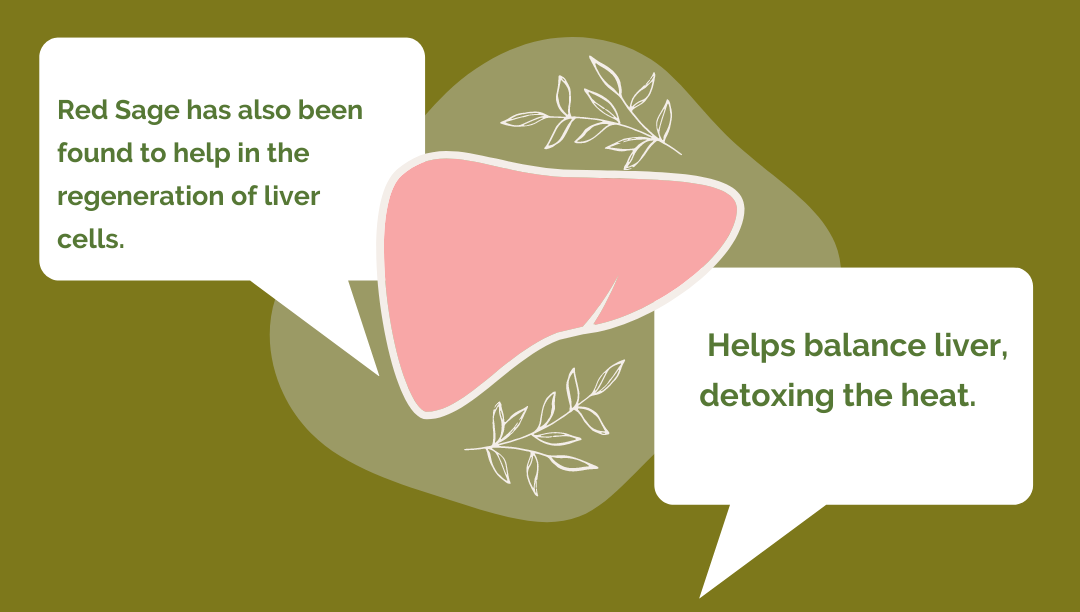 A study was conducted to know the effects of known traditional Chinese herbs (including Dan Shen) in preventing fractures in osteoporosis patients. The results were quite promising and it was concluded that some of the osteoporosis symptoms actually improved.8

According to another research study conducted by the researchers of the University of British Columbia, substances present in the Red Sage selectively block an enzyme called Cathepsin K (CatK), which plays a major role in the breakdown of a bone-strengthening protein called collagen during osteoporosis.9 This astonishing study, along with its findings, was published in the Journal of Bone and Mineral Research.10

Research studies have concluded that the extracts from the roots of Red Sage have antimicrobial properties that help kill the infective microbes present within the body.11

The water-soluble chemicals like danshensu (DSU) and salvianolic acid B (SAB), extracted from the red sage plant have been shown to enhance the proliferation and differentiation of connective tissue forming cells called fibroblasts. These fibroblasts in turn ease the healing of injured tissue or regrowth of tissue by increasing the synthesis of collagen.12

According to Traditional Chinese Medicine (TCM), Dan Shen is considered the meridian of organs. Chinese herbal medicine specialists perceive Dan Shen to be the best for many ailments and consider its following properties:

Because of its antioxidant as well as anti-inflammatory properties, Red Sage is an important herb for maintaining vital energy and optimal health for:

Learn more about how to take Red sage directly from our TCM experts!

Whenever the meridian of energy is blocked due to any cause, certain diseases and symptoms develop that are distressing and hurtful for the sufferer. Dan Shen helps alleviate these symptoms by establishing the energy meridian again. Red Sage / Den Shan helps in: 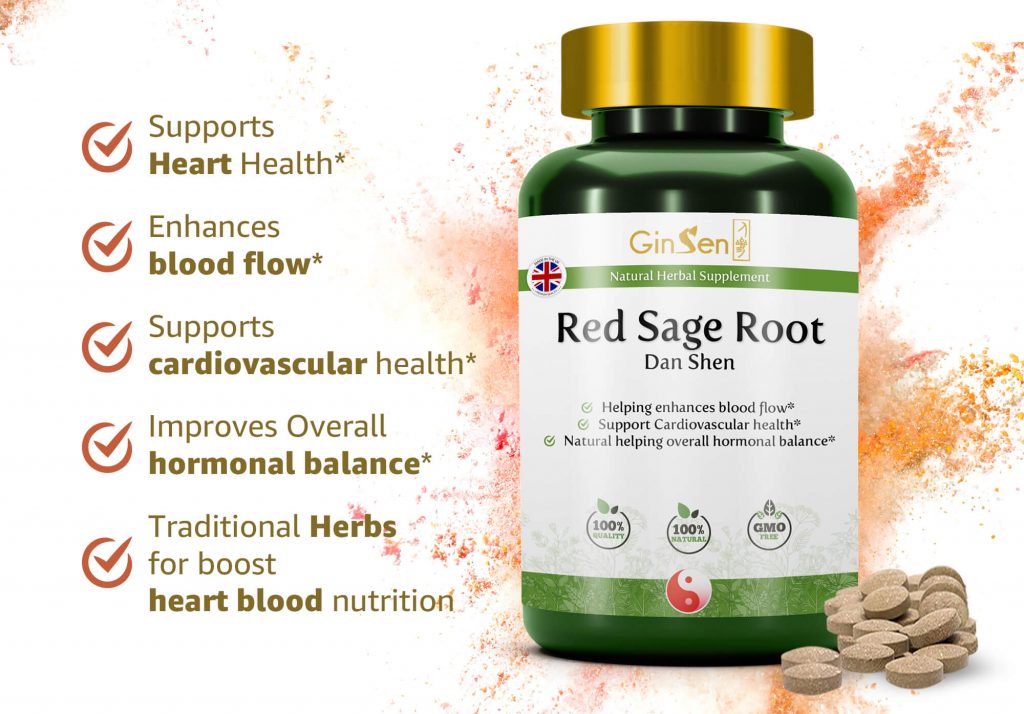 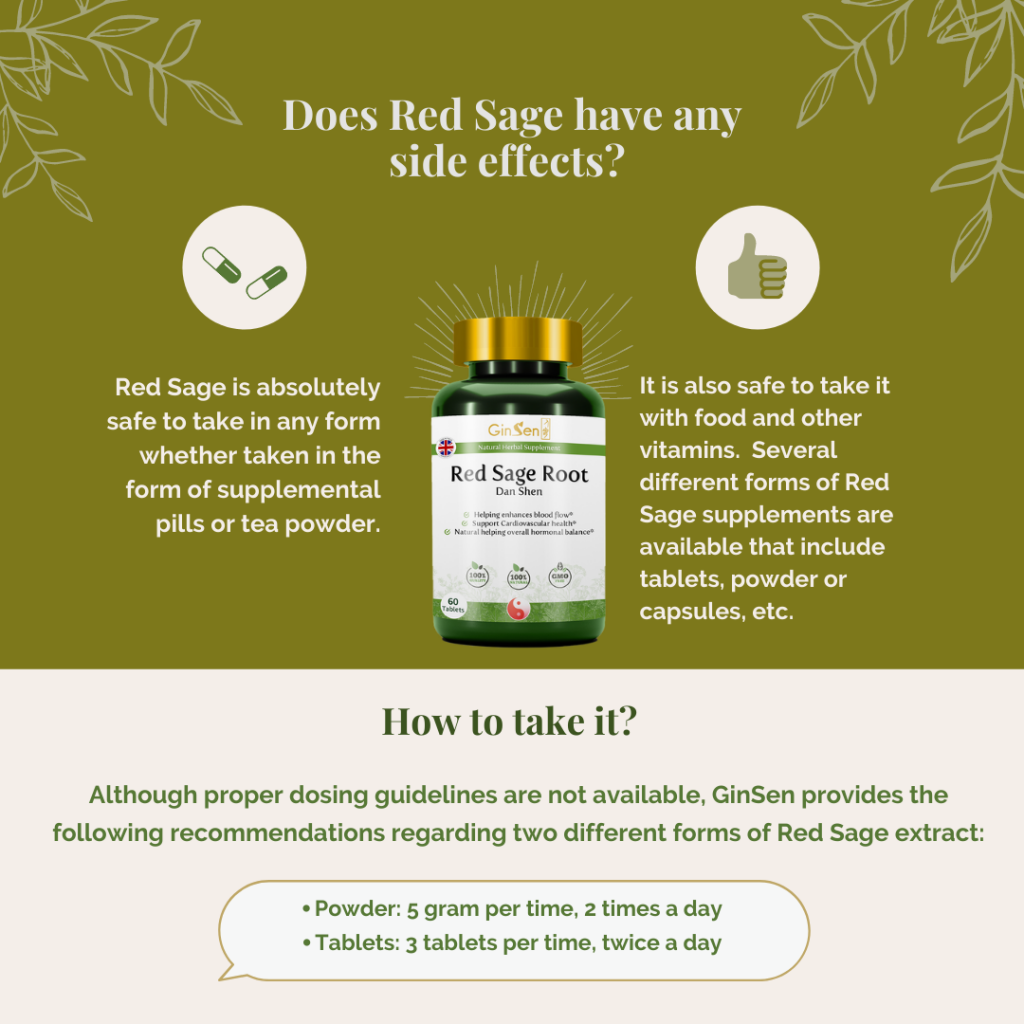